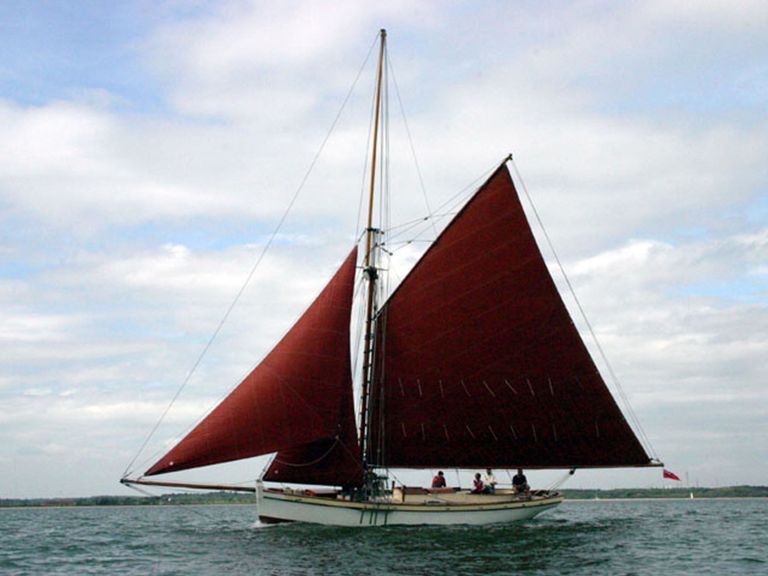 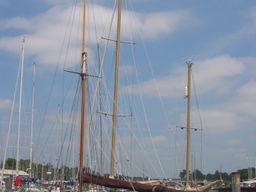 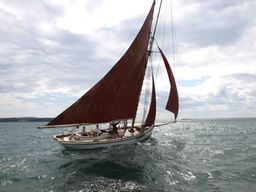 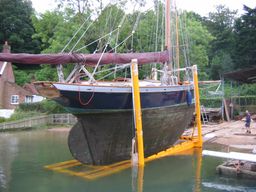 Aeolus was originally built in 1904 in San Diego California, designer unknown but using Kunhardt ideas to develop a GL Watson inspired rig.  She was owned and raced locally successfully and later was used for chartering.  Skipper was Capt Tony Carter

Aeolus spent a number of years laid up in San Francisco Bay in the 1970s..

She was rebuilt by Eric in 1982/3 as an exact replica with the keelson as the only original timber. Double planked in cedar to the waterline with light timber frames of white American oak, fir planks for the topsides, triple layered decking finished in Port Orford cedar and low bulwarks.  Ironwood has been used for beams and structural timbers. Mahogany used for teak structures, teak cap rails and rubbing strakes.

The spars and sailplan were replicated which, in the prevailing style at the turn of the last century, was over canvassed with a boom 10ft beyond the transom and light spars.  This may have been suitable for inshore racing but produced excessive weatherhelm and an unseaworthy boat.   She was seldom sailed and spent more time laid up on the quayside.

Kept onshore at the Elephant Yard where some work was done but not sailed.

In 2005 purchased by Richard Bendy, taken to Lallows at Cowes for extensive work on the hull, deck, engine installed etc. Only occasionally sailed eg 2007 Round the Island Race, due to the unbalanced sailplan.  Bendy purchased Kelpie (another classic 1903 yacht) and ran out of money so sold Aeolus.

December 2007 purchased by Bob Gatehouse, an experienced racing yacht sailor,  who motored her to Poole as the boom had been broken.  Some electrical work done.  Never sailed.

August 2008 purchased by Anthony Wheaton,  her current owner who did some experimental sailing with a reef in the main to help balance her, sailed her to the Elephant Yard in the Hamble.  Upon the advice of Tom Richardson, owner of the Elephant yard, that the boat would sail with a balanced sailplan, took the lines of the hull and commissioned Ed Burnett, naval architect, to produce a balanced sailplan.  The new sails from SKB in late 2009 have been cut very flat; the mainsail has a much shorter foot and bigger headsails have achieved balance and beauty.  She remains traditional with block, tackle and belaying pins as the sole method of securing ropes.

Aeolus has stunning looks with new cream working sails and tan topsails with a large symbol A~ on the sails representing the wind god Aeolus escaping from a jar, where he had been imprisoned by Zeus,  and so blowing Odysseus back away from the underworld.

The yacht was being improved and refurbished over each winter 2010 to 2015.  To provide a full cruising accommodation giving eight berths, fitted in a traditional style including a wood burning stove.

Since 2011 berthed in the Hamble, Solent, near Southampton, UK

This site uses third-party website tracking technologies to provide and continually improve our services, and to display advertisements according to users’ interests. I agree and may revoke or change my consent at any time with effect for the future.
More

This tool helps you to select and deactivate various tags / trackers / analytic tools used on this website.